A large MLS industry research project was undertaken during Summer 2019 to identify the most significant issues facing the MLS industry over the next 30 months. These findings are to be released on September 30, 2019, in an all-encompassing study, the “MLS 2022 Agenda,” the sequel to the ML S2020 Agenda released in 2017.

This study outlines what did or did not happen since the MLS2020 Agenda. It reinforces why the MLS is in distress and why brokers should care. Brokers are challenged to become more involved in the MLS. The study ends with eight recommended strategies and steps to take. 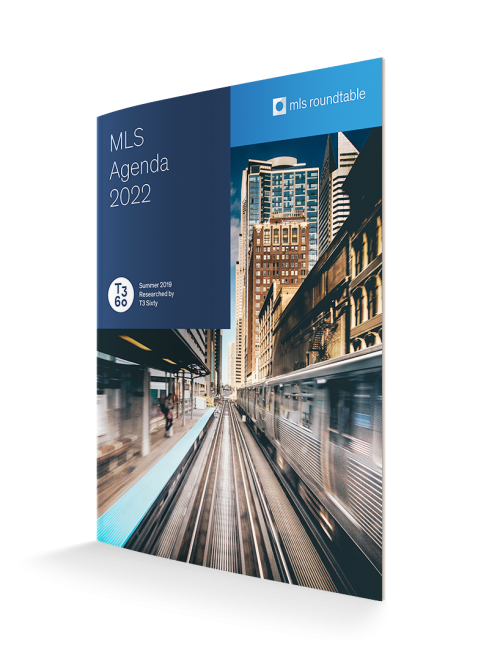 Download Study
About the MLSRoundTable
About T3 Sixty
Press Release

Register for the MLS2022 Agenda to download a copy of the study.

SAN JUAN CAPISTRANO, CA [September 30, 2019] – Members of The MLS Roundtable (MLSRT), and T3 Sixty, the joint authors of a new white paper, firmly believe the MLS is undergoing a fundamental change that will definitively change the direction of MLS organization and services over the next few years.

The Roundtable issued a warning in 2017, with the release of The MLS 2020 Agenda and in 2018 followed up with a four-step plan to revolutionize the MLS. “There are big foundational shifts taking place that many MLS executives do not wish to acknowledge,” says Art Carter, CEO of CRMLS and Roundtable member. “The MLS has failed to protect its essential value propositions,” states John Mosey, CEO of NorthStar MLS, “and we are playing dominoes when the new world’s playing 3-D chess,” says Brian Donnellan, newly appointed CEO of Bright MLS, all members of the Roundtable.

Due to numerous major real estate shifts over the past few years, the MLS is at a crossroads. MLSs are at this crossroads because not enough focus is being placed on the changing nature of the residential real estate brokerage industry. Technology is changing the home buyer and seller of the future and MLS organizations are being faced with a dwindling role as the market’s primary location for all available listing inventory.

In contrast, modern, well-funded companies such as Zillow Group, Redfin, Opendoor and increasingly Compass, are showing that many of the industry’s previously accepted rules no longer apply. These companies are focused on building, adapting and curating great real estate experiences for brokers and agents and with, collectively, thousands of engineers on staff, are doing so at near break-neck speeds. In 2017, the MLS 2020 Agenda stated that MLSs are critical to the real estate industry and acknowledged that technology and the method of transferring data is antiquated.

Given some of the infrastructure challenges MLSs face, and the rapid innovations and deep resources other real estate companies are bringing to the real estate data arena, ensuring MLS’s key role in the future will not be easy, says Stefan Swanepoel, CEO of T3 Sixty, the research company that authored the white paper. Swanepoel, a New York Times best-selling author, is a member of, and the spokesperson for, the Roundtable. “Change does not mean legacy systems and players necessarily become irrelevant,” he said. “As the residential real estate brokerage industry’s comprehensive and trusted data repository, the increasing importance and prevalence of housing data afford MLSs an opportunity few existing and emerging players have. But this opportunity will soon be lost if decisive steps are not taken now.”

“It’s similar to the stock market going away. Unthinkable!” states Tom Hurdelbrink, Northwest MLS CEO and Roundtable member. And that simply will be bad for real estate. According to AnneMarie DeCatsye

CEO of Canopy, the recently restructured and rebranded Carolina MLS, “MLS is not just a tool, search engine or advertising mechanism for listings. MLS brings structure and fairness and creates the real estate marketplace.”

The 2022 Agenda outlines eight action steps for brokers and MLSs to take responsibility and address the shift. According to Swanepoel, the 10 MLSs that make up the MLS Roundtable are all committed to taking meaningful action at their respective MLSs, and several of the proposed steps are already being addressed by them. The hope is that the white paper will redefine the value proposition of MLSs in a new light and spur other MLS leaders, and their broker constituents, to recognize the urgent need to reconstitute the MLS.